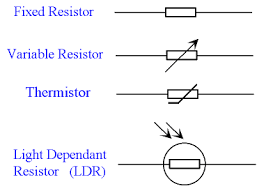 LIGHT DEPENDENT RESISTOR
This is a type of resistor which has a resistance that changes with the amount of LIGHT that falls on it. The light energy produces more free electrons which increases the current for a certain voltage across the LDR which means a drop in resistance. In the DARK its resistance is LARGE (millions of ohms), in the LIGHT its resistance is SMALL (tens of ohms). Very little current will flow through it in the dark.
LDRs are used as light sensors.